How to use DSDV routing protocol in NS2?

Proactive routing protocol maintains constant and updated routing information for each pair of networking nodes by propagating route updates proactively at fixed interval of time. The periodic and event-driven messages are responsible for route establishment and route maintenance. The Destination-Sequenced Distance Vector (DSDV) protocol is the commonly used proactive routing protocol in mobile ad hoc network (MANET). In DSDV, each node maintains a routing table with one route entry for each destination in which the shortest path is recorded. It uses a destination sequence number to avoid routing loops. The sample17.tcl shows a node configuration for a wireless mobile node that runs DSDV as its adhoc routing protocol. Prior to the establishment of communication between the source and receiver node, the routing protocol should be mentioned to find the route between them. Data Transmission is established between nodes using UDP agent and CBR traffic. Routing process follows DSDV routing protocol. 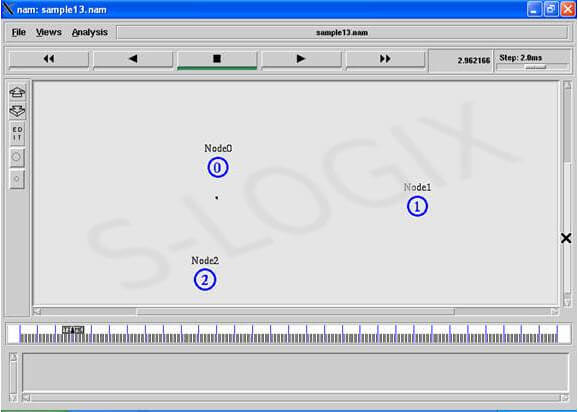