How to create Wormhole attack in MANET using NS2?

A Mobile Ad hoc Network (MANET) comprises of mobile nodes that moves independently in an open environment. Communication between the nodes in a MANET is enabled with the aid of intermediate routers. The nature of MANET such as open medium, dynamic network topology, lack of centralized monitoring, and lack of clear defense mechanisms makes it vulnerable to several routing attacks. In MANET routing, there is a high probability for intermediate nodes to be malicious that might be a threat to the security. Wormhole is the common attack in ad hoc routing in which one malicious node tunnels the packets from its location to other malicious nodes. If the source node happens to choose this fake route, the attacker has the option of delivering the packets or dropping them. In sample22.tcl, the wormhole attacker does not obey the communication model. Data Transmission is established between nodes using UDP agent and CBR traffic. An adversary forms tunnel with other adversary using a direct low latency communication link. 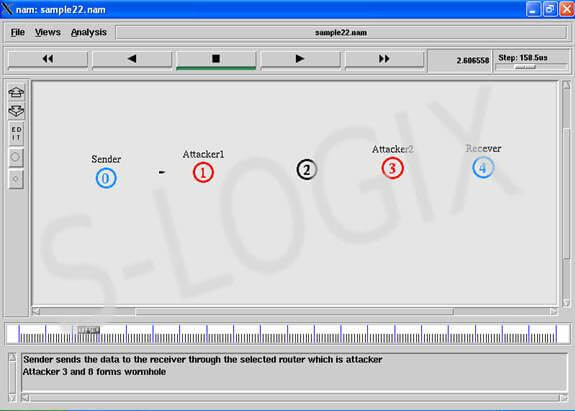